Causes
The Achilles tendon is a strong bands of fibrous connective tissue that attaches the calf muscle to the heel bone. When the muscle contracts, the tendon transmits the power of this contraction to the heel bone, producing movement. The Achilles tendon ruptures because the load applied to it is greater than the tendon's ability to withstand that load. This usually occurs as a result of a sudden, quick movement where there is a forceful stretch of the tendon or a contraction of the muscles eg: jumping, sprinting, or pushing off to serve in tennis. This occurs most often in sports that require a lot of stopping and starting (acceleration-deceleration sports) such as tennis, basketball, netball and squash. The Achilles tendon is on average 15cm in length. Most ruptures occur 2-6cm above where the tendon inserts into the heel bone. This is the narrowest portion of the Achilles tendon and is also the area with the poorest blood supply. achilles tendon rupture is most common when the muscles and tendon have not been adequately stretched and warmed up prior to exercise, or when the muscles are fatigued. the Achilles tendon has a poor blood supply, which makes it susceptible to injury and slow to heal after injury. During exercise the amount of blood able to travel to the tendon is decreased, further increasing the risk of rupture. Most experts agree that there are no warning signs of an impending rupture. However, frequent episodes of Achilles tendonitis (tendon inflammation) can weaken the tendon and make it more susceptible to rupture.

Symptoms
Symptoms of an Achilles tendon rupture usually directly follow a traumatic event where the foot is forced in an upward position at the ankle, causing a sudden tight stretch of the Achilles tendon. There can also be a direct blow to the tendon causing a rupture. There is typically a popping feeling or even a popping sound described during the occurance of the rupture. Typically there is pain with swelling in the region. Often the patient is unable to put weight on this foot as there is too much pain.

Diagnosis
Your doctor will ask you about your symptoms and examine you. He or she may also ask you about your medical history. Your doctor may ask you to do a series of movements or exercises to see how well you can move your lower leg. He or she may also examine your leg, heel and ankle and may squeeze your calf muscle to check the movement of your foot. You may need to have further tests to confirm if your tendon is torn, which may include the following. An ultrasound scan. This uses sound waves to produce an image of the inside of your leg. An MRI scan. This uses magnets and radio waves to produce images of the inside of your leg.

Non Surgical Treatment
There are two treatment options available which are non-operative and operative. Non-operative treatment involves the use initially of a below-knee plaster with the foot held fully bent downwards. This usually stays in place for 2 weeks then is changed for a brace(this is a boot from the knee down to the toes with Velcro straps) which should be worn day and night. The brace will be regularly altered to allow the foot to come up to a more neutral position. The brace will be on for a further 6 weeks. After the 8 weeks you will be referred for physiotherapy to regain movement and calf strength but will probably need to wear the brace during the day for a further 4 weeks. Non-operative treatment avoids the risks of surgery but the risk of the tendon re-rupturing, which normally occurs within 3 months of discarding the brace, is 10%. 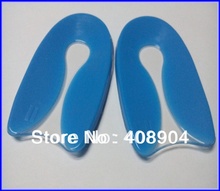 Surgical Treatment
Surgery will involve stitching the two ends of the tendon together, before placing the leg in a cast or brace. The advantage of having an operation is the reduced chance of the rupture reoccurring, however it will involve the risks associated with any surgical procedure, such as infection.

Prevention
The following can significantly reduce the risk of Achilles tendon rupture. Adequate stretching and warming up prior to exercising. If playing a seasonal sport, undertake preparatory exercises to build strength and endurance before the sporting season commences. Maintain a healthy body weight. This will reduce the load on the tendon and muscles. Use footwear appropriate for the sport or exercise being undertaken. Exercise within fitness limits and follow a sensible exercise programme. Increase exercise gradually and avoid unfamiliar strenuous exercise. Gradual ?warm down? after exercising.

« What Are The Symptoms Of Bunions?
Profile

Login to quote this blog

You cannot quote because this article is private.